Both the teams are in need of a victory for different reasons.

As the league stage of MSL is nearing its end, all the teams are either looking to gain momentum or win back to back games in order to qualify for the playoffs. Jozi Stars are in excellent form having won their previous four matches and are once again the favourites as they are playing at the home ground. A victory in this game will take them a step closer to the top position with a place in the final at stake.

Paarl Rocks, on the other hand, have done no good to their cause by losing their last two games. They have to win their remaining two matches now at any cost and hope for the Giants to lose to play the eliminator next week. But for that to happen they should support their skipper Faf du Plessis who has been toiling relentlessly for his team ever since he has joined the set-up.

The Stars have found their groove at the perfect stage of the season and will be keen on continuing in the same vein. They will be aware of the fact that the Blitz are six points ahead of them and a bonus point victory will make things interesting with one league match to play. However, they will have to win both their matches at any cost.

There have been clinical victories in Johannesburg for the teams and the matches have been high-scoring. While the pitch is expected to be flat, the rain threat is hovering over this game. There is a forecast of a thunderstorm during the match and with more than 50 percent chances of rain, there is a possibility of Duckworth Lewis Method (DLS) coming into play or the game might even get washed out which the Rocks can’t afford.

Reeza Hendricks is in the form of his life for the Stars and he is the reason for their winning spree while the time has come for Chris Gayle to perform. Rassie van der Dussen and Dane Vilas hold key to this line-up in the middle-order with the all-rounders Daniel Christian and Dwaine Pretorius to follow.

The Stars have Kagiso Rabada up their sleeves and will be partnered by the recent addition in the Test squad Duanne Olivier. Simon Harmer and Nono Pongolo, the hero of the last game, are the other bowlers in the line-up.

The top four of the Rocks is as good as any team can have in the T20 leagues. Cameron Delport and Aiden Markram open the innings with the captain Faf du Plessis and Vaughn van Jaarsveld at three and four along with the experience of Dwayne Bravo make it one of the toughest sides with the bat. But somehow they haven’t able to click together. There is no better time than this to make it count for them.

The bowling attack comprising of Dane Paterson, Tshepo Moreki and Tabraiz Shamsi among others will have a task on their hands to restrict the likes of Hendricks and Gayle as well.

The prediction is for the toss to play the important role in what could turn out to be a shortened game. 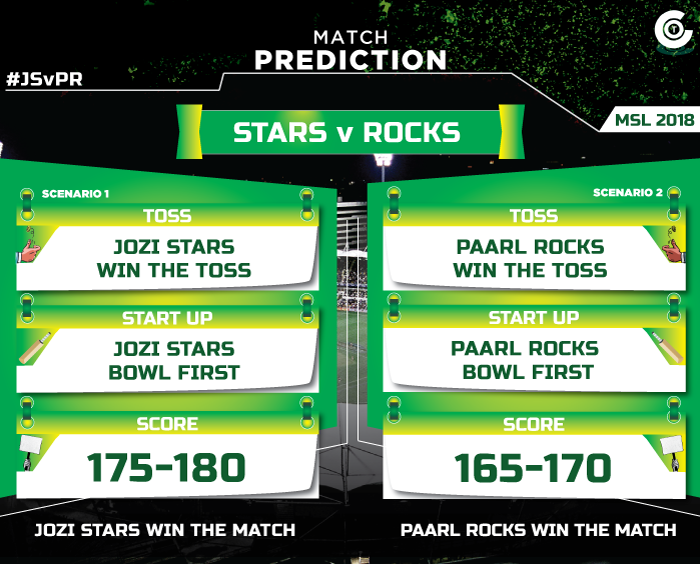