The 24-year-old survived early on and then batted with a lot of confidence and comfort.

Hanuma Vihari became the 292nd Test cricketer to earn an India cap. There was a sense of unrest among former cricketers and experts with regards to his selection in the playing XI ahead of Karun Nair. Vihari was roped into the Indian Test squad for the final two Tests but made it to the XI at The Oval while Nair continued to warm the bench throughout the series. However, the young Andhra batsman justified his selection with a fighting fifty in his maiden outing with the bat.

The 24-year-old survived early on when he was trapped in front on the 3rd ball he faced. Stuart Broad decided not to review the decision which turned out to be a costly one. In his next over, Broad had a successful LBW appeal but the debutant got the decision overturned as the Hawkeye showed the ball was going over the stumps. After a few plays and misses, Vihari got into flow sharing crucial partnerships with Virat Kohli and Ravindra Jadeja.

Fifty on Test debut by Indians in England: 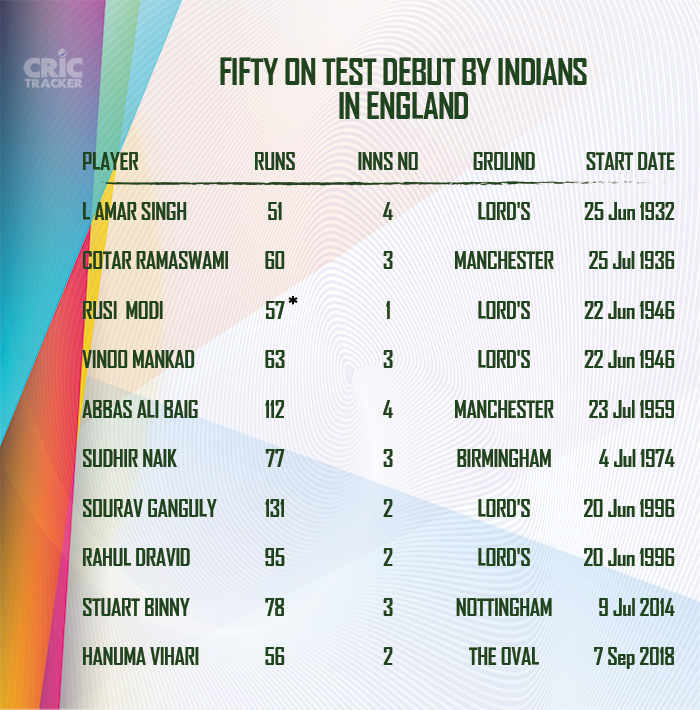 With his 56-run knock, Vihari became the 10th Indian to score a fifty on Test debut on England soil. The list includes the likes of the legendary batsmen Sourav Ganguly, Rahul Dravid and Vinoo Mankad. The last of the previous nine players were Stuart Binny during the 2014 tour of England at Trent Bridge. The Andhra batsman is only the 4th Indian to score a fifty in the maiden innings on Test debut in England after Rusi Modi, Ganguly and Dravid. All the previous three scored 50+ in their maiden Test innings at the Lord’s.

Vihari is the 6th player to score fifty and more in an innings on Test debut for India while batting at No.6. The six-man list includes VVS Laxman, one of those players who inspired Vihari on his way to the biggest stage. The last player to do so was Rohit Sharma in 2013 against West Indies when he made 177. India’s limited-overs vice-captain’s 177 is the highest by any player in Test history on debut while batting at No.6 and lower.

Fifty on Test debut by Indians while batting at No.6: 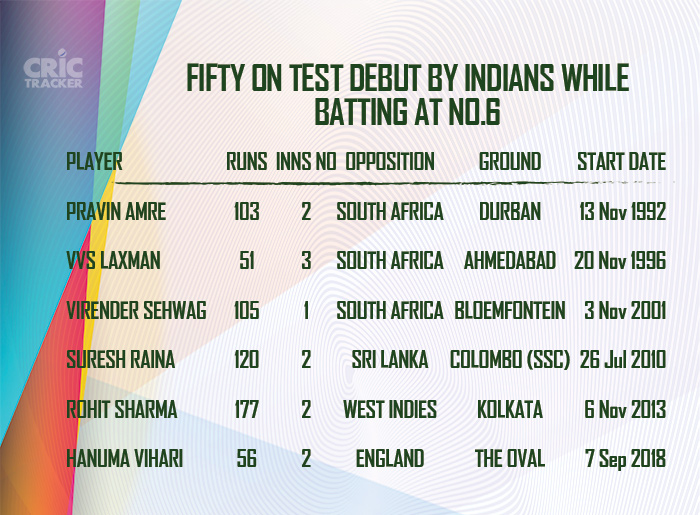