He also became the ninth Indian cricketer to complete 7,000 runs in ODIs.

Indian skipper for the Asia Cup Rohit Sharma notched up his 19th hundred in ODI cricket and in the process, he achieved some great milestones. He became the ninth Indian cricketer to complete 7,000 runs in the format and also got to 300 sixes in International cricket, a feat achieved only by six cricketers previously.

All the Indian and Pakistani fans waited for a long time to witness these arch-rivals combat. But as it has turned out in the Asia Cup so far, a Kohli-less Indian side managed to tame the Men in Green and comprehensively defeated them for the second time in the tournament. Rohit’s incredible rendition made batting look so easy and he led his side from the front into the final.

The 31-year-old also completed 5,000 runs as an opener and became the second fastest in ODI history to get there. Hashim Amla is the only individual ahead of him in this prospect. His career took a turn once MS Dhoni decided to promote him to the top of the order in 2012. But it was the 2013 Champions Trophy when he truly arrived in International cricket.

Rohit races past Sachin and Sourav

Apart from achieving all the milestones he did, another thing to take notice is that he got to this 5,000 mark quicker than Sachin Tendulkar. Whilst the master blaster took 110 innings, Rohit has achieved the feat in just 102 innings. Another Indian on this list is the legendary Sourav Ganguly, who took 123 innings to reach the milestone and is fifth on the list.

Although his career in ODIs kickstarted a while later, Hashim Amla took no time to catch up. In the last five years, he has been breaking a lot of records en route to earning a legendary status in the gentleman’s game. The Proteas batsman has been slightly out of form of late but is expected to bounce back soon.

Sri Lankan stalwart Tillakaratne Dilshan takes the fourth spot, having reached the 5000-run mark as an opener in 121 outings. Mark Waugh is the other notable presence, who took 124 innings to attain the same. Despite taking some time to settle in the International circuit, Rohit Sharma has taken giant strides in the last few years and his stats speak on his behalf now.

Here is the list of openers fastest to score 5000 runs in ODI cricket: 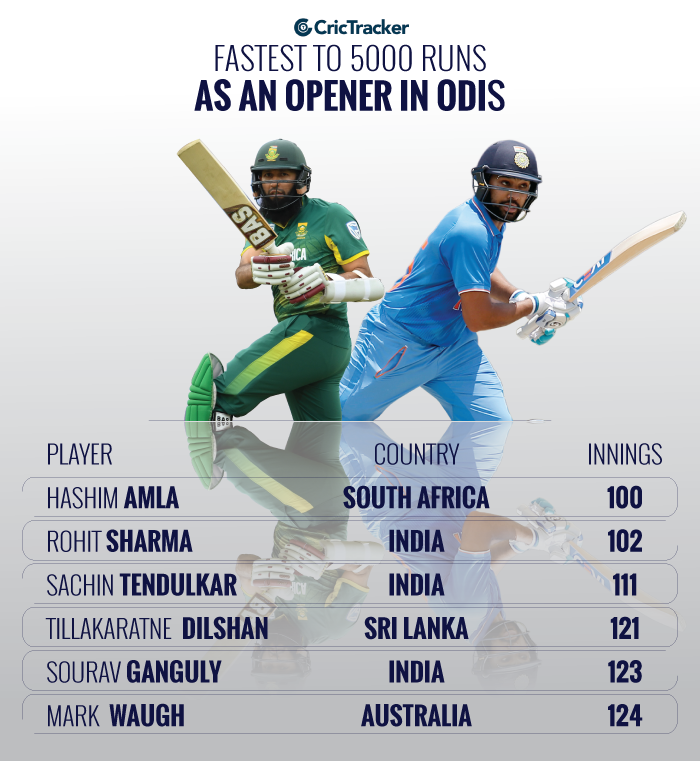