Nikhil Naik scored an unbeaten 95 against Railways including five sixes in the final over.

The long 2018/19 Indian domestic season comes to an end with Maharashtra and Karnataka facing off in the Syed Mushtaq Ali T20 Trophy final. Both the teams remained unbeaten throughout the Super League winning all the four matches in their respective groups. In addition to these four, Karnataka won all the seven league matches. This meant Karnataka will feature in their maiden T20 final being undefeated in the tournament.

Interestingly, Karnataka finished with back to back win during the previous edition of the Syed Mushtaq Ali T20. With the 13 consecutive wins, Karnataka recorded the longest winning streak for an Indian domestic T20 team. They have the experience of Manish Pandey, Vinay Kumar, Mayank Agarwal and Karun Nair on their hand. Maharashtra has been clinical throughout the tournament with some inspiring performances form all individuals.

The Final match of the Syed Mushtaq Ali T20 Trophy 2018-19 between Maharashtra and Karnataka will be played at the Holkar Stadium in Indore.

The chasing teams have won all the five matches with 5:30 PM start here at the Holkar Stadium. The venue hasn’t been producing big totals like it usually does in the IPL and T20Is. A slightly better wicket can be expected for the final with the team batting first making at least 150. 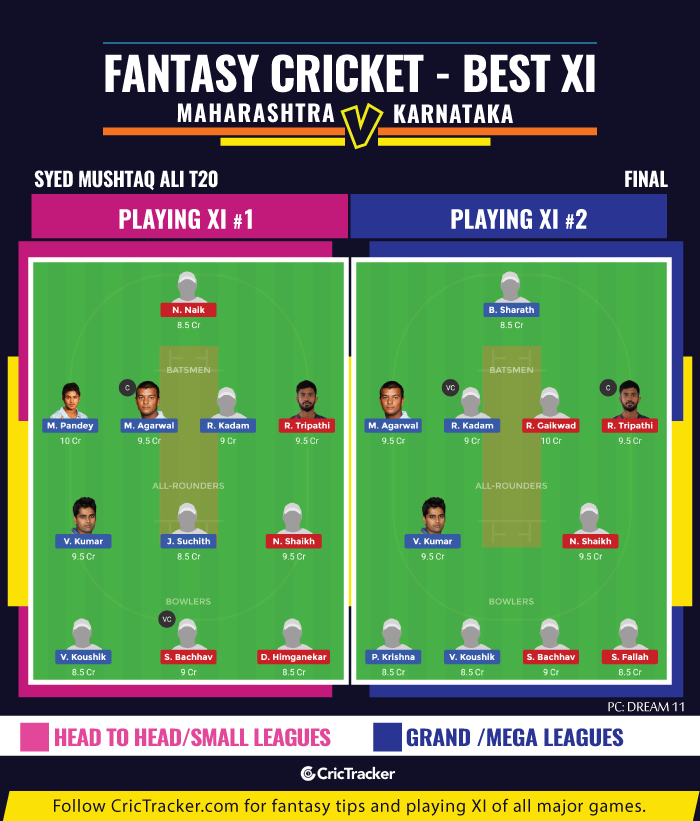 The batsmen pickings have to be made depending on the result of the toss. The opening batsmen in the first innings might struggle considering the way the Indore pitch played in this venue.

The inform Maharashtra team will take some effort to defeat the giant Karnataka team in the final.