Currently, in good form, neither of the teams is likely to make any changes to the combination.

Fireworks are pretty much guaranteed when North Mumbai Panthers and ARCS Andheri lock horns in the eleventh match of the T20 Mumbai League. Both the teams have made a fine start to their season. While North Mumbai Panthers are placed second in the table with two wins in as many games, ARCS Andheri are breathing down their neck at the third spot with two wins from three games.

In their previous outing, the Panthers made light work of NaMo Bandra Blasters. Riding on fifties from skipper Prithvi Shaw and Vikrant Auti, the Panthers piled up 175 for 8 in their allotted 20 overs. In reply, NaMo Bandra Blaster could only manage 148 for 7 to lose the game by 27 runs. Atif Attarwala had impressed with the ball, picking up 3 for 34.

On the other hand, Andheri defeated Shivaji Park Lions by four wickets in their last outing. A fine bowling effort from the likes of Salil Agharkar and Iqbal Abdulla had helped Andheri restrict Lions to 159 for 6 in the stipulated 20 overs. In reply, Andheri had chased down the total with four wickets in hand and one ball to spare. Skipper Akhil Herwadkar had starred with the bat, scoring an unbeaten 79.

So far, most of the teams have scored more than 150 runs at the Wankhede Pitch. Traditionally, the iconic stadium in Mumbai has witnessed high-scoring games and one can expect the same when these two in-form teams lock horns against each other on Sunday.

There is no prediction of rain at all while the temperature will hover around 32-degree Celsius when the game is underway in Mumbai. The humidity will be around 70% while the cloud coverage will be around 31%.

Currently, in good form, neither of the teams is likely to make any changes to the combination.

Prediction is for the team batting second to win the contest. 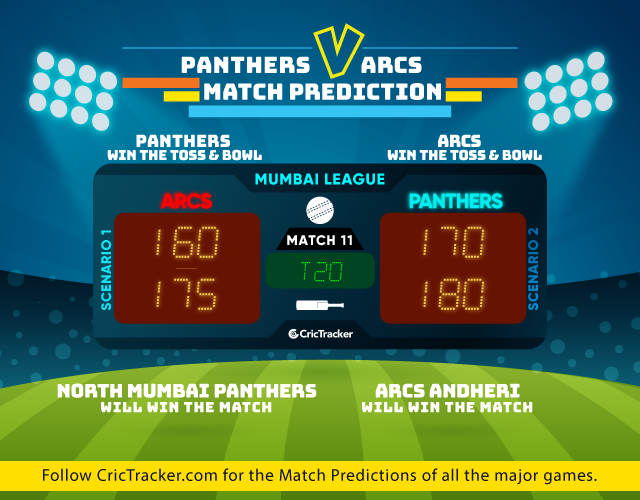